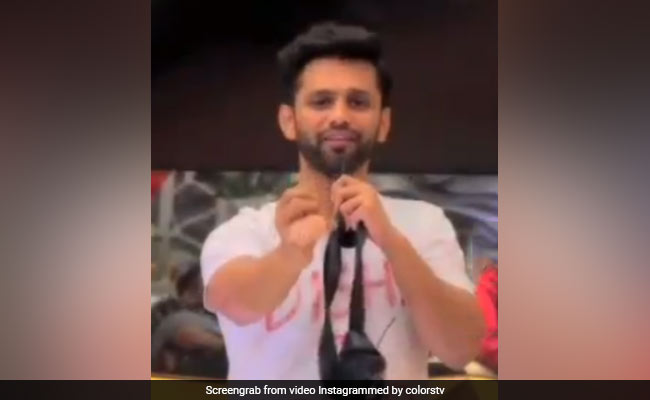 Bigg Boss 14: Rahul Vaidya in a still from the show. (courtesy ColorsTV)

Bigg Boss 14 contestant and singer Rahul Vaidya has been trending big time ever since the latest promo from the TV reality show surfaced online. In tonight’s episode of Bigg Boss 14, Rahul Vaidya will be seen proposing to his girlfriend and actress Disha Parmar on national television. Rahul and Disha have been dating for more than two years now (Rahul revealed in the video). The singer chose to propose to her today because she celebrates her 26th birthday and for that Rahul wanted to surprise her. In the video, Rahul can be seen sporting a white t-shirt with “Marry Me?” written on it. Calling her the “most beautiful girl” he has ever met, Rahul proposed to her. The singer said that he has never been more “nervous” and added that he doesn’t know what took him so long to ask. Rahul said that he will be waiting for Disha’s answer. The couple featured together in Rahul Vaidya’s single Yaad Teri in 2019.

Check out the viral video here:

While Disha Parmar’s response is awaited, her and Rahul Vaidya’s fans couldn’t keep calm and started sharing celebratory tweets instantly. Some fans dug out old pictures of the couple, while others simply tweeted that they can’t wait for the actress to say yes. Take a look at some of the tweets here:

#DishaParmar is trending as she should cos her boy Rahul is leaving no stones unturned to make her feel special
Happiesttt birthday @disha11parmarpic.twitter.com/yjc6lI3mOt

Here are some more tweets:

So they are OFFICIALLY official now#RahulVaidya#DishaParmarpic.twitter.com/3URPoh2M0H

It feels so good to finally see that this show #BigBoss can also be a platform to respect your outside relationships and taking it to next level !! So impressed with you @rahulvaidya23 !! Thanks for changing my perception #dishaparmar plz say yes God bless you both ! #bb14

Watch this space for more updates on Bigg Boss 14.

Here’s how close the US is to a possible Covid-19 surge, expert warns