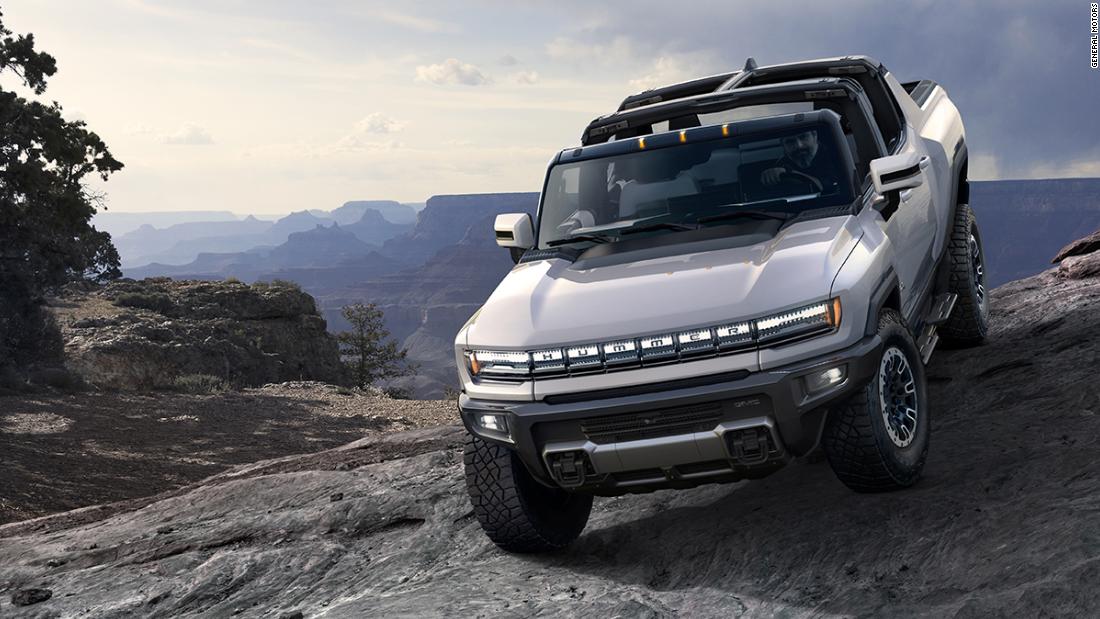 And certain major trends emerged, like a long-awaited embrace of electric trucks and a return to the extra-rugged SUV.

Another big trend: shopping for a car from the Covid-free safety of your home.

Here’s a look at some of the biggest trends that shaped the industry in 2020.

Over the course of this year, one thing was clear: America’s obsession with pickup trucks is far from over.

But there was also another interesting twist. New advances in battery technology have made it possible to create electric versions of these trucks without sacrificing power and adding too much to the price, meaning the once gas-guzzling behemoths have become much more eco-friendly.

Ford unveiled a new hybrid F-150, the first full-hybrid pickup in the US market. It’s a precursor to the upcoming fully electric F-150.
We didn’t just see electric versions of already-existing pickup trucks, however. In January, General Motors was teasing Hummer fans with an ad during the Super Bowl about its upcoming GMC Hummer EV, a hyper-aggressive electric pickup truck.
And then there were a slew of other notable entrants to the electric truck market: Lordstown Motors revealed its strictly-for-business electric pickup that will be built at a former GM factory in Ohio. Fisker, best known for its planned Ocean electric SUV, dropped hints late this year that it’s looking to make a pickup, too. Founder Henrik Fisker even tweeted an image of a pickup bed with name Alaska written on it.
Rivian, which had first unveiled its truck, the R1T, back in 2016, finally revealed the truck’s pricing and details about its capabilities.
All these trucks will eventually compete against Tesla’s radical-looking Cybertruck, which was revealed late in 2019.

One reason electric trucks are becoming so popular is that consumers are starting to trust the technology, said Kelley Blue Book associate editor Allyson Haywood.

It also helps that a lot of truck buyers are business owners, she said, who will look at the fuel and maintenance cost savings of an electric truck. (Electric vehicles cost less to maintain because they have fewer moving parts, don’t require oil changes and don’t wear out their brakes as quickly as gasoline or diesel vehicles. Electricity also tends to cost less than gasoline on a per-mile basis.)

SUVs go back to being tough

Crossover SUVs, often just large hatchback cars with raised suspension, have been wildly popular for years. Auto showrooms are overrun with them. But in 2020, the auto industry seemed to rediscover SUVs and trucks that were built more for rocky trails than paved parking lots.

Ford reintroduced its famed Bronco, responding to years of demand for the long-out-of-production classic model. A direct competitor to the Jeep Wrangler, the Bronco has a removable top and is intended for rugged off-road use. The Bronco Sport is a slightly smaller SUV that’s intended for lighter — but still pretty serious — off-road use.

General Motors’ first fully electric truck, the GMC Hummer EV, is also part of this trend. It’s a 1,000-horsepower all-wheel-drive truck with four-wheel steering that can even drive diagonally if needed.

Not all the new SUVs are really that tough, though. Many SUV buyers really don’t need serious off-road capability — even if they do venture out to a campsite or a trailhead every once in a while.

That’s where SUVs like the new Chevrolet Trailblazer come in. It’s got slightly rugged — more cute, really — looks and it’s available in all-wheel-drive. Still, even Trailblazer Activ, the most capable version, is intended more for dirt roads than no roads.

That woodsy vibe is also why Honda redesigned its Ridgeline pickup to look more rugged, too. And Honda plans to give the same treatment for its Pilot and Passport SUVs as part of an effort to let customers know that, yes, Honda’s SUVs and trucks can get dirty, too.

This trend comes, coincidentally, just as coronavirus-rattled car shoppers who are itching to get outdoors and away from people, said Haywood. Really, she said, it’s mostly a response to the near-ubiquity of crossovers that look like tall cars.

“I do think that when people buy a vehicle, they like to have some sense of individuality,” she said.

One thing that can be attributed to the pandemic was a surge in online car shopping. This was the year that buying cars, just like buying everything else, went online in a big way.

These companies’ sales were already rising before, but “the pandemic has just accelerated all of that, maybe to the tune of several years,” said Carvana CEO Ernest Garcia.

At the start of 2020, JD Power began surveying new car shoppers about their online experiences. Between January and April, when lockdowns were in place in much of the United States, the number of car shoppers who selected a vehicle online increased by 63%, while the percentage of shoppers getting credit approval online more than doubled.

Online car shopping has far from taken over the new car shopping business, though. Even with those big shifts online, paperwork-intensive parts of the process are, in particular, still being done mostly in person.

For instance, despite that big increase, only 20% of new car shoppers got credit approval online in April, according to JD Power’s data. And only 15% of car shoppers got an appraised value for their trade-in vehicle online.

Improved digital processes for those sorts of things will help, said Christopher Sutton, JD Power’s vice president for automotive retail, as will more marketing of online systems by dealers and automakers.

“One thing that we did see that, I think was very encouraging, is that the customers too went through the digital experience did report a better experience on balance,” he said.