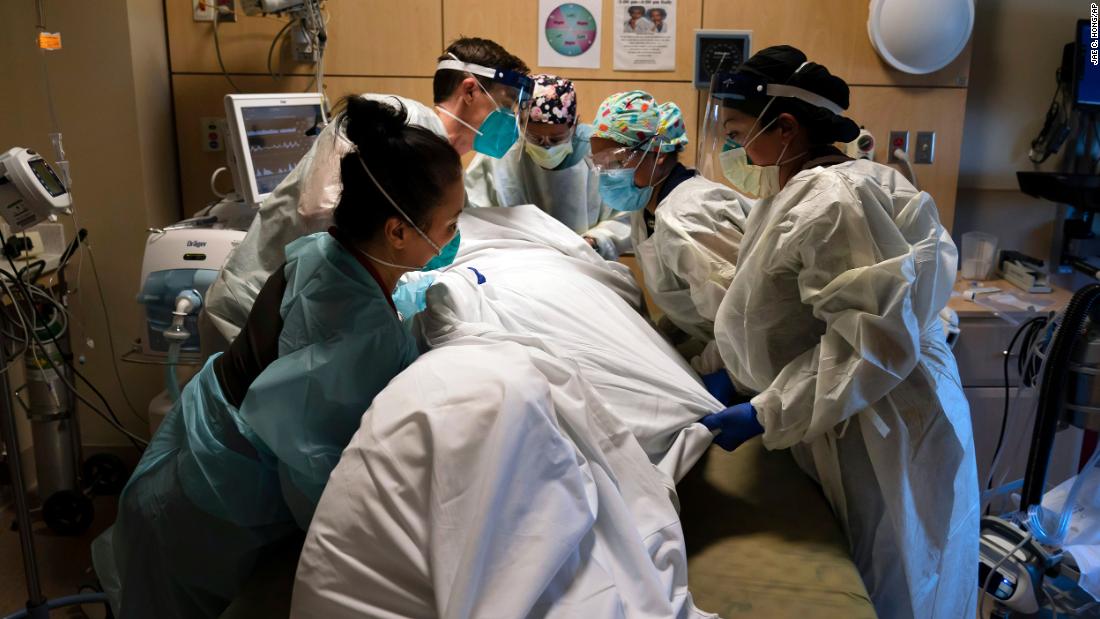 “This pandemic is a lot worse than being in Iraq just because when you’re in a war zone, you can leave that war zone. You can fly out of Iraq; you’re OK here in the United States,” the Yuma doctor said.

“With this pandemic, you cannot fly anywhere … the war is being waged everywhere.”

Now Gilman and other health care workers are pleading for more public safety rules — such as mask mandates or stay-at-home orders — to prevent hospitals from bursting past capacity.

“You can’t overwhelm a hospital and expect that care is not going to be compromised as a result,” Gilman said.

Across the US, the numbers of daily Covid-19 hospitalizations and deaths just reached all-time highs.

And the crisis is only going to get worse.

“The reality is, December and January and February are going to be rough times,” said Dr. Robert Redfield, director of the US Centers for Disease Control and Prevention.

“I actually believe they’re going to be the most difficult in the public health history of this nation, largely because of the stress that’s going to be put on our health care system.”

A nurse who got Covid-19 twice wants help

In Florida, some nurses are taking on 50% more patients than usual.

“We’re definitely seeing a lot more. And in the ICU, a lot more deaths,” said Cynthia Butler, a nurse in Port Charlotte.

“Our Covid patients before had their own room, isolated. And now we have to put two in a room.”

During one recent shift, “we were holding 21 patients in the emergency room. I had four Covid patients myself in the ER,” Butler said.

But since there are only 17 rooms in the emergency department, “you’ve got people in the hall.”

She said a statewide mask mandate could help stop the onslaught of Covid-19. But Gov. Ron DeSantis has refused.

“How has that worked in states that have done it? Has that stopped an outbreak in Minnesota, Illinois, Michigan? What about New Jersey? What about all these states where you have explosion in cases?” DeSantis said.

But growing research shows mask mandates do work — even if they take some time to be effective in reducing Covid-19 spread.
Some local jurisdictions in Florida issued their own mask mandates, but DeSantis recently banned them from issuing fines to violators.

That move infuriated Butler, who sometimes juggles six Covid-19 patients at once.

Butler herself has fallen sick with Covid-19 twice. She believes both infections came from work.

“I know they did. People are just not being educated here in this state,” she said.

“They’re more concerned about … their rights being stepped on and not being able to visit loved ones — as if we don’t all have loved ones,” she said. “I’ve been isolating myself since February because I know how serious this is.”

Like many nurses, Butler said having enough personal protective equipment is still a major concern. Many health care workers have had to reuse N95 respirator masks over and over again.

In May, Butler tested positive and was out for three weeks. She tested negative in June and returned to work, only to test positive again in July.

Even after she recovered, Butler had “heart palpitations” upon returning to work again.

“Just to see the number of people that come in — people just don’t realize how easy it is to get,” she said. “You just don’t know who’s spreading the Covid.”

In some cases, it’s “just getting in a car with somebody to do something and not wearing their mask for maybe an hour. And the next thing you know, they’ve got Covid pneumonia.”

Butler said those who cite personal rights as a reason to not issue mask mandates are missing the bigger, broader issue.

And Americans are fully capable of abiding by other rules in public every day.

“I don’t walk into a store naked and smoking a cigarette, because there’s a law saying I can’t do that,” Butler said. “It’s just ridiculous to say, ‘I can’t wear a mask.'”

Gilman, the Arizona doctor and former medic in the Marine Corps, said health care workers are fighting a war like no other.

“There’s no general helping us … and people in this country just continue to get infected,” he said.

“There’s also an invisible enemy. It’s not a soldier that’s shooting at me. It’s hiding … it can be passed asymptomatically.”

Gilman said he’s tired of calling families and telling them their loved one is dead.

He, too, has been on the receiving end of tragic news. Covid-19 claimed the lives of his young cousin and three of his colleagues from when he worked in New York City earlier this year.

“We need a concerted, organized effort to battle this virus. This is ridiculous.”

First, “we need a mask mandate across the whole state,” he said. “That’s just kind of the basic (necessity) during a pandemic — you should have a mask mandate.”

Gilman also wants a four-week stay-at-home order — including government pay for nonessential workers so they don’t have to worry about finances during that time.

Without a temporary shutdown, “the virus will implement its own shutdown,” he said.

Most states have some type of statewide mask order. Several of the new mandates were recently enacted after major Covid-19 surges in those states.
But 13 states do not have a statewide public mask mandate.
In Arizona, masks are required at certain businesses — such as at movie theaters, gyms, and restaurants when diners aren’t actively eating or drinking. And the state health department now requires masks to be worn on school campuses.

But Gov. Doug Ducey has resisted issuing a full statewide mandate. He said many Arizonians are already wearing masks in public.

“That’s a tribute to Arizona citizens and local leadership,” Ducey said Wednesday at a news conference.

The governor also said he doesn’t want “shutdowns of entire industries” or curfews.

Some local jurisdictions have issued their own mask mandates. But doctors like Gilman say local rules aren’t as effective.

“If you have a mask mandate in one part of the state and you don’t have it in the others, that’s not really doing anything because those patients in the other areas are going to get intubated and transferred into the hospitals and taking up ICU beds,” he said.

“So we need a mask mandate everywhere … the mandate has to come from up top to actually force them to do it.”

He’d even support a $1,000 fine for violators, saying it’d be similar to other laws that protect public safety.

“You get fines for speeding in your cars,” he said.

Gilman suggested anyone who doesn’t believe in the need for masks to “go volunteer in a hospital and help move the bodies.”

“Last Sunday, I was on shift and I couldn’t transfer an ICU patient out … it means that our ICU was filled … and no hospitals were accepting any patients because they didn’t have any ICU beds.”

Some patients are sent out of state for care

This onslaught of Covid-19 is taking a devastating toll in rural areas. In Missouri, some patients are getting sent hundreds of miles away.

“My fellow physicians in my state, they may spend six hours calling around to a hospital” that can accept a Covid-19 patient, said Dr. Christopher Sampson, president of the Missouri College of Emergency Physicians.

“We’ve had reports of people who have been transferred out of state. So … your family member goes to the emergency department, and the next thing you hear, unfortunately, is they’re being transferred to another state hours and hours away because that’s the only hospital that has room to care for them.”

“Missouri is now nearing a situation we all feared, our hospitals and ICUs are being overwhelmed with COVID-19 cases,” he wrote.

“As physicians working clinically, we routinely wear masks for 8 to 12 straight hours to keep everyone safe in the hospital. We physicians definitely know firsthand masks work to significantly limit spread of COVID,” the letter said.

“Unfortunately, we know it isn’t enough to expect people to follow through with mask wearing on their own. We can tell through high case numbers in those areas without a mask mandate that this strategy is not working.”

Sampson said this week he has not received a response to his letter, dated November 18.

At a news conference the following day, Parson said, “This virus is everywhere.” But he said he would not issue a statewide mask mandate, instead allowing cities and counties to reach their own decisions about local rules.

“It is imperative that Missourians take personal responsibility and social distance, wear a mask, practice personal hygiene, and limit their gatherings,” Stephanie Whitaker, a spokesperson for the governor’s office, told CNN.

In El Paso County, Texas, the crisis is so dire that refrigerated trailers have been storing an overflow of Covid-19 victims.

Now Juan Anchondo is terrified of what will happen this winter.

“I know people are going to get together, and I know we’re going to have a surge,” said Anchondo, a registered nurse.

“Christmas is coming up, and then New Year’s. And all these things — one after another — I’m afraid of what’s going to happen to our nation and El Paso.”

But the state attorney general and local businesses fought back, and a Texas court of appeals issued an injunction that halted that shutdown about two weeks after it went into place.

That was like “a punch in the gut to health care workers,” Anchondo said.

“The infections keep going up, and it feels like there’s no end in sight,” he said. “Nurses in El Paso have been speaking up in support of the stay-home order.”

Anchondo said one his biggest fears is getting infected and passing the virus to his family.

Even young people and those who don’t end up hospitalized can suffer long-term effects from Covid-19.

“There are some people that don’t even have their taste back. And there’s some people who have memory loss,” he said.

Anchondo said he appreciates everyone who’s wearing masks, staying home and doing everything they can to help stop this pandemic. But too many people are letting their guard down.

“Some people don’t get it until it affects them, or they infect their loved one.”

What to make of the CDC’s new guidelines for vaccinated people? Dr. Wen explains