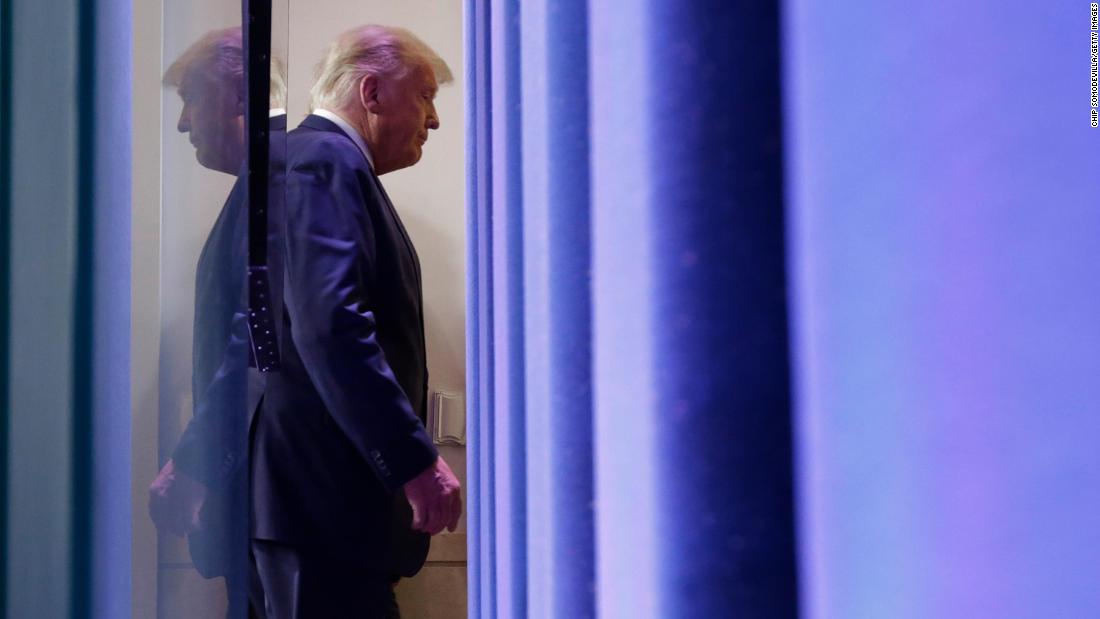 The question is what can Trump accomplish before January 20 at noon, when his term officially ends. Will he go full John Adams and stay up all night signing things for Joe Biden to undo?

Biden’s popular vote advantage is approaching 5 million votes. More than 76 million people voted for him. He is still on track to reach 300 votes in the Electoral College.
We know Trump doesn’t technically have to concede, but more important than admitting defeat is refraining from doing actual damage to the country on the way out. Instead, Trump is using the cogs of government to question the results, carry on an agenda voters rejected and delay an orderly transition.

Question the results! Barr has instructed the Department of Justice to investigate allegations of voter fraud where there are none. The head of the DOJ’s election division resigned in protest.

“Having familiarized myself with the new policy and its ramifications, and in accord with the best tradition of the John C. Keeney Award for Exceptional Integrity and Professionalism (my most cherished Departmental recognition), I must regretfully resign from my role as Director of the Election Crimes Branch,” wrote Richard Pilger in a resignation letter posted by a former colleague on Twitter. He’ll remain at DOJ in another capacity.

Carry on his agenda! Trump’s taken a new and active role in getting his social media hawk nominee to the FCC seated before the new Congress is seated in January.
According to the New York Times, he’s removed the scientist in charge of the National Climate Assessment and installed a climate change skeptic. He’s removed the head of the agency who oversees public utilities after that person had some kind words about renewable energy.
He’s cleaned house at the Pentagon, elevating a loyalist who made Islamophobic statements, among others, and, separately, fired the woman who oversaw the nuclear arsenal.

His White House has told federal agencies to carry on planning for his 2021 budget proposal.

Delay transition! World leaders — even the strongmen Trump likes most like Turkish leader Recep Tayyip Erdogan — are calling Biden to congratulate him. But Secretary of State Mike Pompeo said his agency, rather than prepare for a transfer of power, was ready for a “smooth transition to a second Trump administration.”

Pompeo, without any irony, said it’s too early to know who won. “We’re gonna count all the votes. When the process is completed, they’ll be electors selected. There’s a process, the constitution lays it out pretty clearly.”

I asked Max Stier at the nonpartisan and nonprofit Partnership for Public Service, which runs the Center for Presidential Transition and aims to help candidates from both parties, how worried Americans should be about this obstruction.

Stier pointed out the 9/11 report found that a slow transition after the 2000 election helped contribute to the 9/11 terror attacks. This is real world stuff, he said. You can read our full conversation here.

It’s possible some country or group could be plotting an attack that is going unnoticed as we all fight. But we already know that tens and tens of thousands of Americans are going to die while Trump isn’t working with Biden. They’re going to die of Covid, which is exploding all over the US right now.

Biden’s team announced a list of advisers who will spearhead his transition even as Trump moves to block it.

“Well, I just think it’s an embarrassment, quite frankly. The only thing that — how can I say this tactfully — I think it will not help the President’s legacy. I think that — I know from my discussions with foreign leaders thus far that they are hopeful that the United States democratic institutions are viewed once again as being strong and enduring,” he said.

“But I think at the end of the day, you know, it’s all going to come to fruition on January 20, and between now and then my hope and expectation is that the American people do understand that there has been a transition, even among Republicans who are people who voted for the President,” he added. “I understand the sense of loss, I get that, but I think that a majority of people who voted for the President … they understand that we have to come together.”

Trump is using the courts, too

CNN’s Katelyn Polantz is deep in the weeds of the Trump campaign’s legal war over the election.

I particularly liked her story about how Trump and his allies used their own court allegations in Pennsylvania as proof that Republicans had been kept from watching the canvas of votes.

Sometimes a legal complaint can be mostly complaining. Over the past week, a series of Trump campaign and Republican National Committee public statements and even court filings have fanned the idea — with little evidence — that last Tuesday’s election could and should be contested.

Legal experts widely agree that that isn’t the case — and that some of the filings are more disinformation or public relations than lawsuit. Judges have quickly dismissed cases that attempt to raise the possibility of voting irregularities, while elections experts make clear President-elect Joe Biden’s margin of victory is too wide for court cases to reverse and that existing court cases deal with too few votes, if any, to matter.”

When I asked her to briefly summarize all of the cases we all need to be paying attention to, she said it’s hard to count:

There are a lot, and different ways to categorize them.

Some linger from before or during Election Day, others have come in after.

Some are from Republican pollwatchers or other affiliates, while a handful of newer cases or appeals are from the Trump campaign itself.

The claims and requests made in the cases are all over the map too, with some litigating over literally a few feet where ballot-counting observers can stand.

The most sweeping cases, like one filed by the campaign in Pennsylvania this week, appears to throw the kitchen sink at the court in an effort to stop the certification of Biden as a winner, so that the state legislature could step in to put PA’s electoral votes toward Trump.

If the Trump administration can be compared to a reality show, the legal strategy here is like that game show Wipeout, where people run across increasingly comical obstacle courses. Aside from the Electoral College bid, the cases on the whole don’t deal with enough votes to shift any state that Biden has won to Trump, and no one’s come up with proof of the supposed voter fraud allegations.

Fair point. So I followed up with the most important question, which is how long will it take for all of these to be exhausted. Will we be hearing about Trump’s election lawsuits after he’s already a former President?

Her answer about when will this end was hugely depressing:

This is the question for the country right now! When does Trump concede and acknowledge Biden as having won the election? That’s the answer, isn’t it?

The thing about court is that lawsuits get due process, even if they’re bound to fail. You get bad signals from a judge or learn new information, you can amend your case. You lose, you can appeal.

Even once Biden is sworn in, Trump could theoretically still be pursuing ways in which he believes his campaign was wronged.

Or Republicans still could be attempting to get rulings about this election that would matter in future elections. I don’t know if that’ll happen, but it’s always fair to say that courts move slowly sometimes, and that can be deliberate.

The bigger question is will judges play ball in the highly unlikely way Republicans hope they will, before states formally certify their votes and the Electoral College chooses the President, which happens in mid-December.

How to watch Oprah’s interview with Harry and Meghan