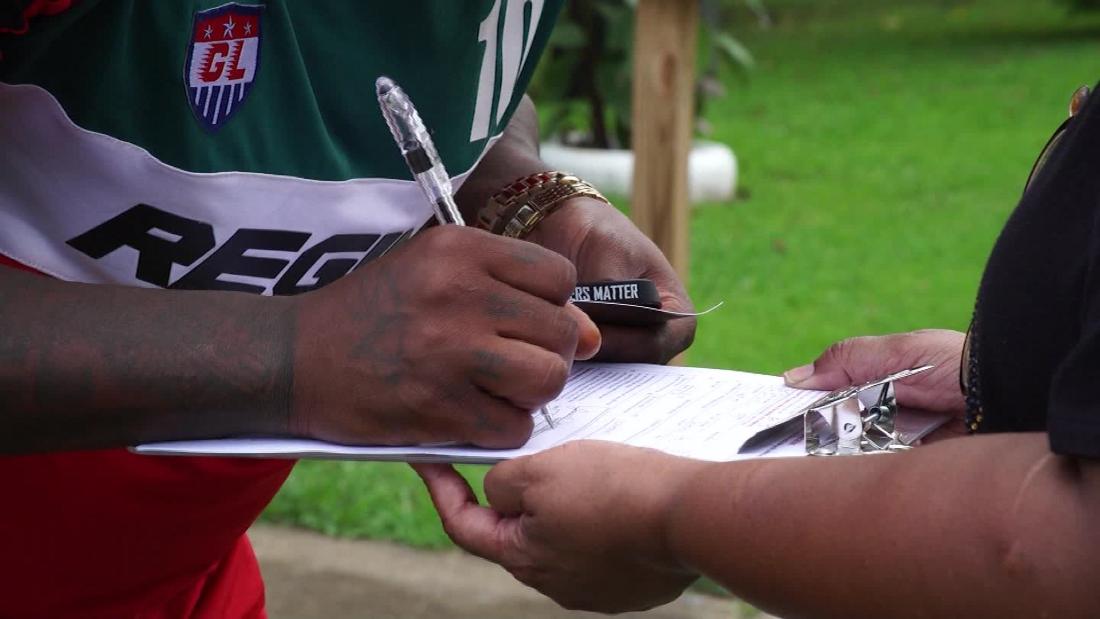 President Donald Trump and Democratic rival Joe Biden’s radically different visions of America aren’t the only things on the ballot. Fundamental rights are subject to the vote, too, more than half a century after the struggle for Black freedom.
America is at a time of crisis: a nationwide reckoning on race, police brutality and what justice looks like, a crippling pandemic and an increasingly economically divided citizenry.
Despite the protests that jolted the country throughout the summer in the wake of the police killings of Breonna Taylor and George Floyd and the current unrest in Philadelphia following the police shooting of a Black man, Walter Wallace Jr., Black Americans are among those showing up at the polls in record numbers.
In fact, it may well be because of those horrific incidents that so many Black Americans are turning out — even as fear stalks the once simple act of voting.
“Ordinary people with extraordinary vision can redeem the soul of America by getting in what I call good trouble, necessary trouble. Voting and participating in the democratic process are key,” the congressman and civil rights lion John Lewis wrote in a New York Times op-ed printed after his death in July. “The vote is the most powerful nonviolent change agent you have in a democratic society. You must use it because it is not guaranteed. You can lose it.”
And indeed, the vote is under siege in this election.

Trump has spent months trying to delegitimize the electoral system and he has threatened lawsuits against states well before Election Day. Biden, the Democratic presidential nominee, has urged voters to create an outcome so unassailable that Trump can’t steal a second term via litigation before a Republican-friendly Supreme Court.

Tuesday’s contest isn’t a mere duel between two parties. It’s a battle between two categorically different approaches to governance. The Democrats want to mobilize as many voters as possible; the Republicans — the political minority — want to go in the exact opposite direction.

Overwhelmingly, Black voters, the backbone of the Democratic Party, are on the receiving end of Republican chicanery: voter ID laws, shuttered polling stations, purged voter rolls, the disenfranchisement of incarcerated people, voter intimidation.
It isn’t a stretch to say that such underhanded maneuvering mirrors the political landscape of the 1960s, when activists such as Lewis fought against a system that had directed its full powers against Black Americans.
“Sometimes I wake up and I think we are paralleling the ’60s all over again,” Joanne Bland, who as an 11-year-old joined hundreds of activists in the 1965 “Bloody Sunday” voting rights march in Selma, Alabama, told CNN’s Fredreka Schouten in September. “The laws that they passed to prevent African Americans from voting were insurmountable, and states could make up their own rules. That’s pretty much where this is going now.”
Sure enough, on Monday, a federal judge in Texas rejected a Republican attempt to invalidate some 127,000 drive-through ballots cast in the Democratic-leaning Houston area.

“When you balance the harms, you’ve got to weigh in favor of that — in counting the votes,” Judge Andrew Hanen ruled after a nearly three-hour hearing.

In a November op-ed for The Washington Post, the lawyer Benjamin L. Ginsberg, who for decades represented a variety of Republican campaigns, sharply condemned the autocratic jockeying of Trump and his yes-men.
“This is as un-American as it gets. It returns the Republican Party to the bad old days of ‘voter suppression’ that landed it under a court order to stop such tactics — an order lifted before this election. It puts the party on the wrong side of demographic changes in this country that threaten to make the GOP a permanent minority,” he wrote. “Absent being able to articulate a cogent plan for a second term or find an attack against Joe Biden that will stick, disenfranchising enough voters has become key to (Trump’s) reelection strategy.”

High-profile shooting deaths of Black Americans have occurred with seasonal regularity this year.

In particular, the police killings of Taylor and Floyd sparked sustained uprisings throughout the summer.

Some Black Americans have used the repeated devastation of police violence as a means of motivating others to vote out a President overflowing with anti-Black animus — who views a movement that simply affirms that Black lives matter as a “symbol of hate.”
“We need to get somebody in office that’s going to work on our behalf,” Bianca Austin, the aunt of Taylor, who in March was killed during a botched police raid in Louisville, Kentucky, told CNN’s Harmeet Kaur in October, adding that “a lot of people are just sick and tired.”
Taylor’s family received a sizable settlement — $12 million — and the city agreed to reforms such as offering a housing program to incentivize officers to live in the areas where they serve and tightening the process of issuing search warrants.
Still, a grand jury decided not to indict any officers in connection with Taylor’s death. Some members of the panel later said that Kentucky Attorney General Daniel Cameron hadn’t really given them any other option and that he’d made misleading public comments about the case.

In October, Taylor’s family launched a foundation both to keep the 26-year-old’s memory alive and to fuel political change. One of the foundation’s ambitions on the latter front: shuttling Louisville voters to polling sites, free of charge.

“Please, if you don’t have a candidate in mind, just vote because Breonna can’t vote,” Austin told Kaur.

To the vast majority of Black Americans, it seems impossible to survive another four years under Trump — under a President who can’t even explicitly acknowledge the systemic racism of an institution rooted in the slave patrols of the 18th and 19th centuries.

Far from being the “great equalizer,” the novel coronavirus pandemic has only deepened persistent disparities — in employment, in housing, in access to high-quality doctors.
“The virus is layering over an infrastructure where people of color have been living with so many disparities that affect their ability to deal with an economic crisis and a public-health crisis,” Tricia Neuman, senior vice president of the Henry J. Kaiser Family Foundation and executive director of its program on Medicare policy, told CNN in April.

And yet, as it’s become clear over the past eight months that Covid-19, the disease caused by the virus, poses a disproportionate threat to people of color, the catastrophe has grown less urgent in some political leaders’ eyes.

“White Americans are also suffering,” The Atlantic’s Adam Serwer wrote in May, “but the perception that the coronavirus is largely a Black and brown problem licenses elites to dismiss its impact. In America, the racial contract has shaped the terms of class war for centuries; the Covid contract shapes it here.”

Black voters have noted this neglect in more recent weeks, too.

“We have a President who is totally tearing apart our whole democratic Constitution,” Wilburn Wilkins told CNN in October. “Many people are dying because (Trump) is ignoring the Covid pandemic, ignoring the fact that people are unemployed, need financial resources. We need a change.”

Wilkins sees how the Trump White House’s decisions have uniquely harmed people of color — and will likely have consequences far into the future.

“The nomination of a conservative to the Supreme Court, stacking of lower courts in order to have cronies to carry out conservative ideas, most likely will affect Black and brown people,” Wilkins said. “They’ll affect things such as civil rights, Obamacare — all of these things have the potential to negatively impact minorities.”

Wealthy Indians fleeing Covid are shut out of Maldives

Top Stories The News Article - May 15, 2021 0
Maldives has banned tourists from South Asia, cutting off an escape route for wealthy Indians fleeing their own country's Covid-19 crisis. Source link