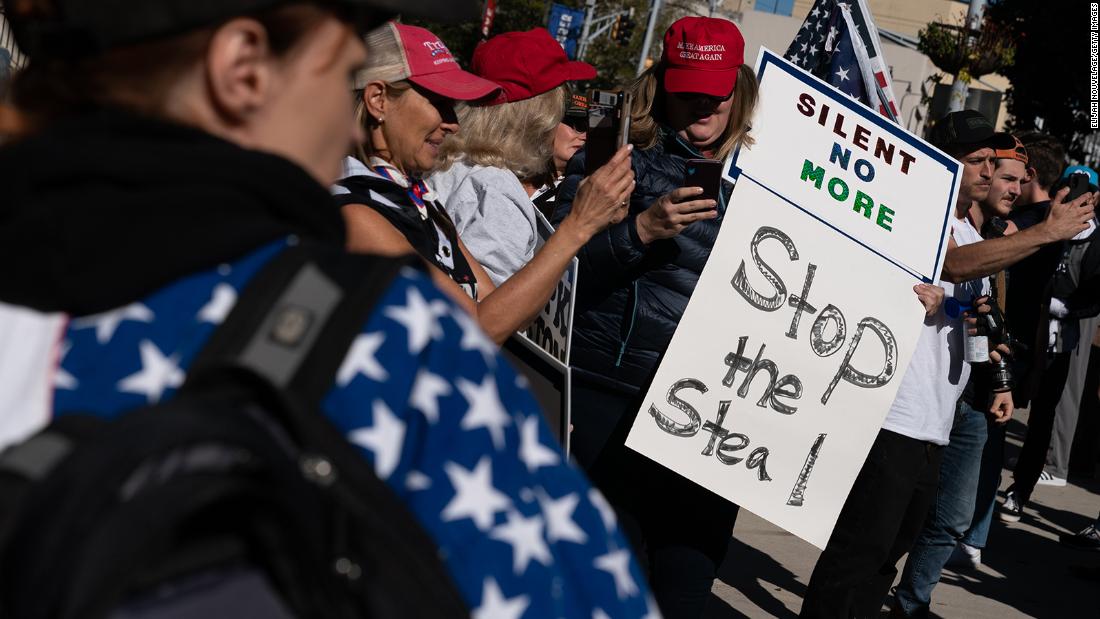 They keep losing in the courts, so now they say “overturn the election.”

What will they say next? And when should the reality-based press cover what they’re saying?

America is in a perilous place right now — notwithstanding the fact that the Trump team’s legal moves seem pathetic and destined to fail. The mere fact that they’re trying is destabilizing for democracy, since millions of people believe the lies, and believe the fact-checkers are the real liars.

I’m an optimist by nature, but I can’t figure out an optimistic thing to write here.

When I’m channel surfing at night, I see two Americas that exist in parallel right now — on side-by-side tracks — two Americas with completely different assumptions and expectations and information sources. One track is rooted in the reality that Trump was never a popular president, was unable to expand his base, and was voted out of office. The other track is a fictional story, titled “BATTLE FOR THE WHITE HOUSE” by Lou Dobbs’ show, that says the election is not over, Trump is going to win, and if he doesn’t, it will be because the Democrats and the media stole it from him. One of these storytellers, Trump attorney Sidney Powell, told Dobbs on Thursday that “the entire election, frankly, in all the swing states should be overturned and the legislatures should make sure that the electors are selected for Trump.”

For Friday and for the history books: “President Trump is using the power of his office to try to reverse the results of the election, orchestrating a far-reaching pressure campaign to persuade Republican officials in Michigan, Georgia and elsewhere to overturn the will of voters in what critics decried Thursday as an unprecedented subversion of democracy. After courts rejected the Trump campaign’s baseless allegations of widespread voter fraud, the president is now trying to remain in power with a wholesale assault on the integrity of the vote by spreading misinformation and trying to persuade loyal Republicans to manipulate the electoral system on his behalf…”

But Biden says he’s ‘not concerned’

Oliver Darcy writes: “Asked at a press conference Thursday if he is worried Trump and his allies might successfully be delegitimizing him as president, Biden replied that he is ‘not concerned.’ Biden said the ‘vast majority of the American people’ don’t buy what Trump is doing. Which is true, a majority do not. But polling indicates that a vast majority of Republicans do buy into this nonsense — and Biden has shown no real interest in mounting an aggressive comms strategy to counter the lies against him. How can he unify the entire country when most Republicans think he straight up stole the election?
>> Amanda Carpenter’s point: “I get that Biden is focused on COVID but there has to be some effort by an affiliated group to counter all the messaging against his presidency. This can’t go unanswered…”

Thursday’s Trump news cycle was driven by what WaPo’s Glenn Kessler called “the craziest news conference of the Trump presidency.” The Trump lawyers who were there — Rudy Giuliani, Jenna Ellis, Joseph diGenova and Sidney Powell — are well known to the Trump-Fox base. It was practically a made-for-Fox event. Still, it was an atrocious decision to carry the entire press conference live — for an hour and a half — without any meaningful fact-checking. The mistake was underlined by liberal commentator Marie Harf, who said the stoking of mass voter fraud lies is “really harmful to democracy” — when host Harris Faulkner cut her off to go live to the presser.

Over on CNN, Brianna Keilar noted that the presser was “so bananas we can’t even bring it to you, because it is just so full of B.S.” But Fox, Newsmax and OANN went ahead and aired it all. As David Folkenflik said on Twitter, “If you’re in the news business, it’s malpractice to carry Giuliani’s press conference live at length without any cut ins to note the myriad ways the public record contradicts him.” Faulkner didn’t even do that afterward. Even though Giuliani shredded his credibility years ago, she stayed in Fox’s default position, which is to assume that liars and hucksters are truth-tellers and heroes…

They are conspiracy theorists

Oliver Darcy writes: “After watching the press conference, I wondered: At what point do news orgs start prominently identifying members of Trump’s legal team as conspiracy theorists? There is not much daylight — if any — between the nonsense Giuliani and Powell were spouting and what you might hear from Infowars’ Alex Jones. So why not describe them as such in stories? Simply referring to them as ‘legal advisers’ does not convey to audiences how deranged these people are, and actually works to give what they say some undeserved and extra weight…”

— Mitt Romney’s new statement on Thursday night: “It’s difficult to imagine a worse, more undemocratic action by a sitting American president…” (Twitter)
— Earlier in the day, NBC News policy editor Benjy Sarlin went viral with this tweet: “In a couple of months, we’ll be hearing impassioned speeches invoking the Founders to argue some executive order on health care is tyranny from people who were sitting quietly while this was going on. It’s not going to be possible to just go back to ‘normal’ after this.” (Twitter)
— Kevin D. Williamson has some questions: “How long are we going to keep pretending that this madness isn’t madness?” Also: “How long will we continue to pretend that what’s being broadcast by Fox News and talk radio is political commentary rather than the most shameful, irresponsible, and unpatriotic kind of sycophantic for-profit propaganda?” (NRO)
— Matt Gertz observed that after Tucker Carlson said he was getting a bigger role at Fox News, the network’s so-called “straight news” shows have highlighted his commentary more than a dozen times… (Media Matters)

Paul Ryan, where are you?

The former House speaker is in a unique position because he is on the Fox Corporation board of directors. In theory, at least, he is in a position of power. And his disdain for Trump is well known. But Ryan and the rest of the Fox leadership seems content with the crazed election denialism tilt of the network’s TV coverage.

Now, execs at Fox will argue — DO argue — that they’re not far-right like Newsmax and OAN. But Fox aired Rudy’s presser in full. The 7, 8, 9 and 10pm hours on Thursday all led with the mass-fraud theme. At 7pm, Martha MacCallum suggested that Democratic election lawyers, led by Marc Elias, pulled a fast one on Republicans by changing the rules so that more ballots would be counted. At 8pm, Tucker Carlson heaped a whole lot of skepticism on Sidney Powell’s claims, but he still led with the subject. He acted like the invisible man when he said “a lot of Americans believe this election was rigged. They aren’t saying that because they are crazy. They’re not just saying it because they’re mad. They MEAN it, and that is a potentially fatal problem for this country.” He left out the fact that right-wing outlets keep fomenting the “rigged” idea. At 9pm, Sean Hannity claimed that “allegations of election irregularities continue to pile up.” And at 10pm, one of the banners below Laura Ingraham said “DEMS & MEDIA IGNORE GROWING FRAUD ALLEGATIONS.”

Consider the cumulative effect of all that chatter, for a moment. Are Paul Ryan and the Murdochs proud of what Fox is producing?