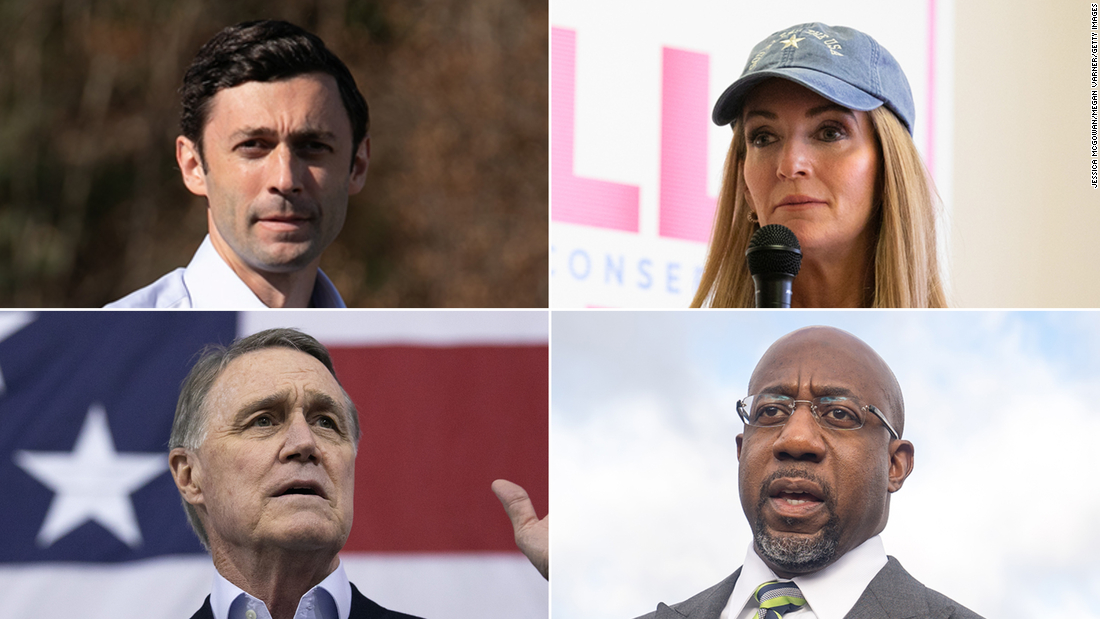 Lose both and Democrats retake the chamber. Win either one and Republicans retain the narrowest of majorities heading into the 117th Congress. The stakes are impossibly high.

Our conversation, conducted via email and lightly edited for flow, is below.

Cillizza: Describe the scene in Georgia over these past two months. Trump contesting the 2020 election AND two runoffs!

I’ve struggled throughout the races over how to best to describe these dramatic cliffhangers, with four candidates competing in high-stakes runoffs that will shape President-elect Joe Biden’s agenda.

Maybe the best way to capture it is: Dramatic.

There’s no shortage of breathtaking developments: Secretly recorded tapes, controversial photos and footage — and of course President Donald Trump’s ongoing war with fellow Republicans in Georgia. And then there are the incredibly high stakes involved.
As Vice President-elect Kamala Harris put it in Columbus last month: “Everything that’s at stake in November is at stake in January.”

Cillizza: There’s a tendency to lump both races together. Have they been distinct from each other? And if so, how?

Bluestein: Each of the candidates are running their own distinct operations — but they are also effectively running as dueling tickets.

It’s a bit confusing, but there’s a reason for that. Jon Ossoff and Raphael Warnock need to sweep both Senate seats for Democrats to flip control of the Senate, while Republicans decided to pool resources early to defend their majority.
Both Republicans have assailed their opponents as “radical liberals” who would lead the nation down a path toward socialism, but with different lines of attack. Loeffler has focused on sermons and stances Warnock staked from the pulpit of Atlanta’s famed Ebenezer Baptist Church, while Perdue has charged that Ossoff is a feckless liberal who is too inexperienced to hold the job.
The Democrats have swung right back, accusing their rivals of being stooges of Trump and profiting off the pandemic. They’ve also been more willing to embrace party leaders, including liberal figures like Sen. Bernie Sanders and Speaker Nancy Pelosi, that past candidates would have run screaming from.

Cillizza: Trump. How big a factor is he in today’s vote? And is it positive or negative? Or both?

Bluestein: Like just about everything else in American politics now, Trump has shaped this contest. Both parties recognized immediately this would be a race for their bases — a pool of 2.5 million or so voters for each side in Georgia — rather than a contest to win over the undecideds.
Loeffler and Perdue have done everything they can to placate Trump. They’ve chastised Secretary of State Brad Raffensperger, refused to acknowledge Biden’s victory, skipped a vote to override Trump’s veto of the military spending policy and backed his call for $2,000 stimulus checks. On Monday came the biggest step yet: Both said they backed the doomed GOP effort to challenge Biden’s win in Congress.

Democrats have tried to paint a picture of a post-Trump era in American politics, complete with more funding to fight the coronavirus, expanded health care access and a sweeping new voting-rights law. But they’ve also hammered the Republicans for tying themselves so closely with a President they say is undermining democracy.

And of course, the race was further rocked over the weekend by Trump’s extraordinary demand to Raffensperger to “find” enough votes to reverse his election defeat. Democrats framed the recording as a brazen attempt to undermine democracy, while the GOP campaigns sought to minimize it.

Cillizza: The Democratic candidates have been somewhat overshadowed in all of this. Is one a better candidate than the other? Or running a better (or worse) campaign?

Bluestein: That’s a great point. As one Democratic operative called to remind me today, the run-up to Tuesday’s vote was dominated by talk about the Republicans: Trump’s fuming about his election defeat, the push to contest Biden’s victory in Congress, the bombshell tape. Even Biden’s visit to Georgia was somewhat overshadowed by Trump’s rally.

The Democrats, by the way, are OK with that. They aren’t struggling to project a sense of unity like the Georgia GOP now is. And they feel that Ossoff and Warnock work in tandem together to help counter the party’s traditional struggles in statewide runoffs, when younger and more diverse voters typically show up in lower numbers.

Ossoff, 33, has been appealing to millennials, African Americans and others who might usually ignore these overtime contests. And Warnock, who leads the church where Martin Luther King Jr. once preached, has tried to re-engage Black voters.

Cillizza: Finish this sentence: “The chances of one party sweeping BOTH seats today is _________.” Now, explain.

Bluestein: It’s hard to predict a race like this, particularly with so little solid polling, but I’ll wager the answer is: Very likely.

The Democrats have basically run as a package deal, as have the Republicans. Voters here have been bombarded by an onslaught of ads, teams of canvassers, text messages, digital messaging and other breathless appeals [casting] one side as good and the other as the face of evil. It’s hard to see this ending in a split decision — and of course that does Democrats no good, since they need a clean sweep to flip Senate control.

But I can’t rule it out, either, especially if the margins are as tight as they were in November, when Biden defeated Trump by fewer than 12,000 votes. Many Republican analysts expect Perdue, who has a longer track record in GOP politics than Loeffler, to outdo her in the runoffs.