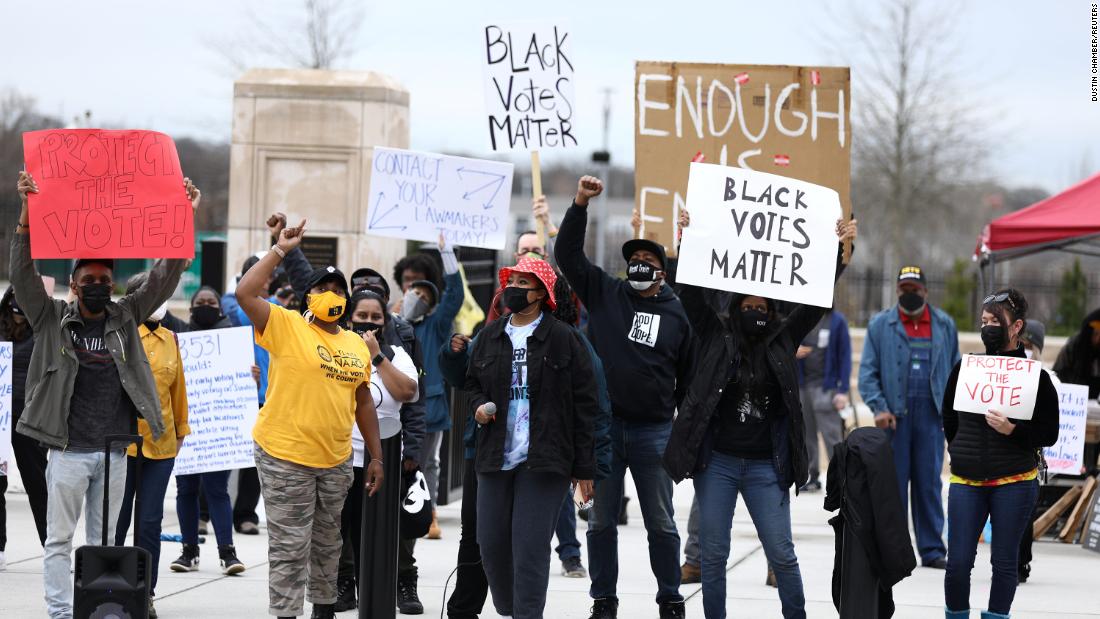 Republican state lawmakers rushed through a broad law Thursday making it harder to vote that disproportionately targets Democratic and Black voters in a battleground vital to the 2020 election and future presidential and congressional contests.

The move confirms the Peach State as the epicenter of the fight for American democracy that raged through Trump’s presidency and during the insurrection he incited against the US Capitol — and now threatens to taint future elections as Republicans in multiple states pursue new laws to limit voting.

“What I’m worried about is how un-American this whole initiative is. It’s sick. It’s sick,” President Joe Biden said at the first news conference of his presidency that afternoon.

The Georgia law raises the question of whether election safeguards that prevented Trump’s energetic efforts to rig the 2020 White House race after the fact in the state will stand firm in future elections amid false claims of electoral fraud by a president.

It was drawn up after Democrats captured Georgia in the presidential election for the first time since 1992 amid massive turnout nationally as voting methods, including mail-in ballots, were expanded to make it easier for Americans to fulfill their fundamental democratic rights in a pandemic. Georgia Republicans also lost two US Senate seats that handed Democrats control of the 50-50 chamber on the basis of huge Black turnout in runoff elections in January.

After leaving office, Trump demanded that Republican state legislatures pass laws to ban mail-in voting and to prevent courts from weighing in on electoral disputes. Using his massive popularity in the GOP, the former President has made the acceptance of his false conspiracy theories about voter fraud in 2020 a litmus test for Republican candidates seeking his support in upcoming primary elections.

The Georgia bill is only one example of GOP efforts in multiple states — including many crucial electoral battlegrounds — to hold back a diverse demographic tide in cities that favor Democrats, which critics see as an attempt to cement minority rule in the United States.

GOP leaders justify the voter suppression measures by arguing that they are needed to crack down on fraud and to restore the public’s faith that US elections are fair. But multiple courts and Trump’s own Justice Department found there was no widespread electoral fraud in 2020. And voter mistrust was largely fueled by Trump’s blatantly false claims that he had been cheated out of office in a corrupt election, which were incessantly broadcast by conservative media outlets.

Georgia’s action threw a political grenade into the debate over a Washington campaign by many Democrats to abolish Senate supermajority rules that Republicans could use to block their sweeping election bill, known as the For the People Act. The measure would establish national standards and reverse restrictions like those that are now the law of Georgia. Republicans brand the Democratic bill as an unconstitutional power grab.
The drama in the Georgia Legislature unfolded as Biden condemned restrictive state legislation as a remnant of the Jim Crow era that institutionalized racism and hinted that he could ultimately back abolishing the Senate filibuster to get the Democrats’ House-passed bill through the chamber.

But Biden declined to reveal his strategy for getting the voting rights bill into law.

The new law in Georgia requires more stringent voter verification requirements for absentee ballots, allows state officials to take over election boards and limits ballot drop boxes that make it easier for people to vote. The law allows any Georgian to make unlimited challenges to voter registrations, and, incredibly, makes it a misdemeanor crime for anyone to offer food and water to voters stuck in long lines to cast ballots.

Black voters hampered by the restrictions of voting in urban areas have often found themselves lining up for hours to vote in inclement weather. The clear targeting of African American voters in Georgia and elsewhere recalls some of the ugliest racial episodes of America’s past, and is fueling claims of open Republican racism.

The Georgia law was quickly signed by Republican Gov. Brian Kemp, who incurred the wrath of Trump last year for refusing to play along with his attempt to override Biden’s victory by 12,000 votes in the state, which was confirmed by several audits.

Kemp claimed that the law “makes it easier to vote and harder to cheat.”

In a statement to CNN, Georgia Secretary of State Brad Raffensperger, a Republican who defied Trump’s pleas in a telephone call to find votes to overturn Biden’s victory, said he would still stand up for voter freedoms but did not criticize the law.

“In implementing this law, I will ensure that no eligible Georgia voter is hindered in exercising their right to vote, and I will continue to further secure our elections so that every Georgian can have confidence in the results of our elections,” Raffensperger said. Earlier this week, Trump announced that he was backing Rep. Jody Hice in his effort to beat Raffensperger in a primary contest.

Kemp’s swift signature on the law was another sign of the fierce pressure that Republican politicians who hope to have a political future face from Trump and his acolytes in their states. Kemp is up for reelection in 2022 and could face Democrat Stacey Abrams, a former state lawmaker and prominent voting rights advocate who played a crucial role in Biden’s victory in Georgia.

“As the FBI continue to round up seditionists who spilled blood to defend a lie about our elections, Republican state leaders willfully undermine democracy by giving themselves authority to overturn results they do not like,” Abrams said in a statement. “Now, more than ever, Americans must demand federal action to protect voting rights as we continue to fight against these blatantly unconstitutional efforts that are nothing less than Jim Crow 2.0.”

The Georgia law, which critics fear could allow state officials to deny counties the right to certify their own election results, and other measures suppressing the vote are likely to face rigorous challenges in court. Indeed, by Thursday evening, a suit challenging the Georgia law had already been filed by three voting rights groups.

Damon Hewitt, acting president and executive director of the Lawyers Committee for Civil Rights Under Law, a nonpartisan organization, said the measure directly targeted voters of color who took part in record numbers in the 2020 election.

“This should be marked as Exhibit A in making the case that discriminatory voter suppression is alive and well, and makes clear why we need federal voting rights legislation to stop these laws in their tracks,” Hewitt said. “We stand ready to take action and protect the fundamental right to vote through the courts.”

The For the People Act awaiting action in the Senate would create automatic voter registration nationwide and restore portions of the Voting Rights Act that were gutted by the Supreme Court. It would also strengthen mail-in voting and permit early voting across the country, while taking steps to cut wait times at the polls.