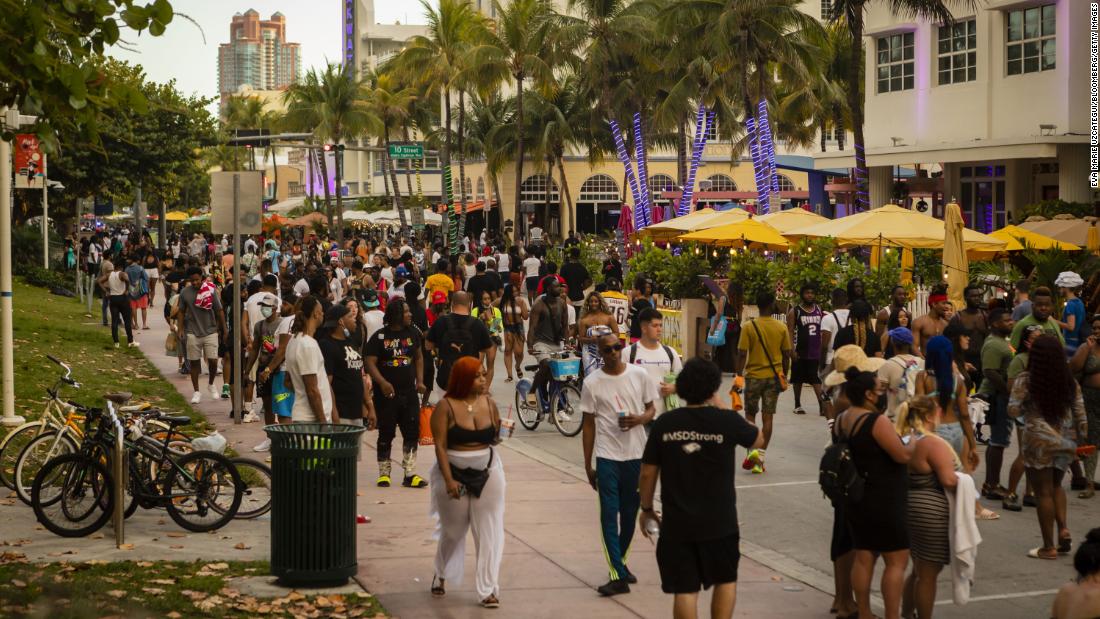 “We are so close — so very close — to getting back to the everyday activities we all miss so much,” Centers for Disease Control and Prevention Director Dr. Rochelle Walensky said during a recent White House Covid-19 briefing. “But we’re not quite there yet.”

And again, it may be familiar mistakes that hinder the country’s progress: lifting critical measures too early, disregarding experts’ guidance and politicizing public health tools.

“At this point in the pandemic we know what to do,” emergency physician and CNN Medical Analyst Dr. Leana Wen said. “And by not doing it, and in some cases actually going against guidance, we are doomed to repeat what happened before.”

What that could mean is more unnecessary infections, hospitalizations and more American lives lost.

“Better times are ahead,” President Joe Biden said earlier this week. “We can have a safe, happy Fourth of July with your family and friends, in small groups in your backyard. The real question is: How much death, disease and misery are we going to see between now and then?”

After a catastrophic winter surge, cases of the virus plummeted for several weeks earlier this year. At the same time, vaccinations began slowly ramping up.

Governors pointed to the lowered Covid-19 numbers and new vaccines as reason to up capacity limits and — in some cases — drop mask mandates. Leading health officials — including Walensky and Dr. Anthony Fauci — advised against it.

But in the past six weeks, more than a dozen state leaders have eased restrictions — even as case numbers began flattening at levels that experts warned were uncomfortably high, before they eventually started inching back upward.

Track Covid-19 cases in the US

Experts are worried about the quick abandonment of safety measures as the virus still runs rampant. They’ve worried before — and they were right.

Rewind to one year ago — when more than 90% of Americans were in lockdown as the first Covid-19 wave hit the country. Some of those measures lasted just a few weeks, even as the US led the world with the highest number of reported infections.
Former President Donald Trump, in hopes of quickly reopening the economy, touted progress in the Covid-19 outbreak, tweeting last April the country was seeing a “flattening of the curve.” In Texas, Gov. Greg Abbott lifted the stay-at-home order about a month after it was imposed, saying the state was “beginning to see glimmers that the worst of Covid-19 may soon be behind us.” Other states, like Georgia, reopened businesses with restrictions and pushed for a return to normalcy.
By Memorial Day, infections in parts of the country were soaring again as some Americans flocked to parks, restaurants and beaches to celebrate the holiday. And then, a violent summer surge prompted states to pause or roll back their reopening.

“The wave across the Southern states in the summer, that was due to premature lifting of restrictions and masks,” said Dr. Peter Hotez, dean of the National School of Tropical Medicine at Baylor College of Medicine. “It bears some resemblance to what we’re seeing now.”

“Prematurely relaxing masks and social distancing restrictions, that seems to be a recurring theme with each of the peaks that we’ve seen,” he added.

This week, Alabama Gov. Kay Ivey became the latest state leader to announce masks would no longer be mandated statewide, adding residents were still “strongly encouraged” to wear them. On Wednesday, Georgia Gov. Brian Kemp announced he was loosening remaining Covid-19 restrictions, declaring the state was “open for business.”
The reopenings across the US concern epidemiologist Michael Osterholm. The variant has already wreaked havoc in Europe and experts say it’s more contagious, more likely to cause severe disease and potentially more deadly.

“I worry very much that as much as the vaccines are a major new development, our opening up everything in the face of what we know is happening in Europe … that’s a really difficult proposition,” Osterholm said.

Public mitigation measures are our best bet to beat another surge as we build up our vaccination numbers. With only about 25% of American adults fully vaccinated, experts say the US is nowhere near where it needs to be to control the virus from spreading.

But getting the country to heed experts’ advice was no easy task before — and it’s an even bigger challenge in the face of Covid-19 fatigue, nearly 13 months into the pandemic.

“There are two reasons why half a million Americans lost their lives,” Hotez said. “One was due to the virus … the second was the defiance. The defiance of the public health interventions.”

Defiance from both political leaders and residents.

Recall the CDC’s warnings several months ago over the dangerous potential of Thanksgiving travel. Despite those warnings, travel numbers did jump, and so did infections, just weeks after that. It wasn’t the only time that happened.

“Every time you have an increase in travel — whether that was the Fourth of July, or Thanksgiving or the winter holidays — where you have people mixing across households, that has … led to a surge,” epidemiologist Dr. Celine Gounder recently said on CNN.

Last month, travel numbers soared again. Popular spring break destinations saw crowds packing bars and restaurants while ditching masks and social distancing measures. And though it may feel safer to do so now, it’s not. There’s still a lot at stake.

“You don’t want to be the person to die three days before you were scheduled to get your Covid-19 shot,” Osterholm said.

High infection numbers now could mean A) more preventable illness and deaths and B) a higher chance that more concerning variants of the virus develop, Wen said.

“In a sense, we could also be prolonging the pandemic here in the US and worldwide by not taking the aggressive measures now,” she added.

Vaccines could give people a strong incentive to listen to the guidance, experts say, by providing a clear end game.

“Giving people a clear timeline is important because we can’t just tell people to hold off indefinitely,” Wen said. “But if we say to people, ‘It’s a matter of weeks before you are fully vaccinated, please, can you hold off until then?’ I think a lot of people would be willing to do that.”

But among the factors hurting the US the most in its response to Covid-19, experts say, is the deep division that helped politicize life-saving public health tools, like face masks.

“A mask is nothing more than a life-saving medical device, and yet it got categorized in all sorts of other ways that were not factual, not scientific, and frankly dangerous,” National Institutes of Health Director Dr. Francis Collins said during an interview with “Axios on HBO” in February. “And I think you could make a case that tens of thousands of people died as a result.”

Trump, who repeatedly downplayed the danger of the virus, ignored the advice of the science community and declined to wear a mask at his election rallies. Some governors refused to ever implement a statewide mask requirement. An Arizona city leader organized a protest in response to a local mask order. Last month, Idaho residents held “Burn the Mask” rallies, where they torched face masks in several barrels.

“There were people who were not wearing masks because of a political statement,” Fauci said on CNN last week, speaking to the national debate over masks. “That is really, you know, inexplicable, because it’s not a political thing. It’s a public health measure.”

And now parts of the country could be making the same mistake with vaccinations. A CNN poll conducted by SSRS released last month showed large political divisions over vaccines: While 92% of Democrats said they had gotten a dose of the vaccine or planned to get one, that fell to 50% among Republicans.

“I really worry and I’m actually quite certain that we’re not going to reach herd immunity because of it,” Wen said. “At least we’re not going to reach herd immunity in 2021. I can’t see us getting to that point because of how vaccines have been so politicized.” Experts including Fauci have estimated somewhere between 70% to 85% of Americans would need immunity — either through a vaccine or from recovery after a Covid-19 infection — to get control of the virus in the US.

Arkansas Gov. Asa Hutchinson recently told CNN that among Republicans, part of vaccine hesitancy is a “natural resistance to government and skepticism of it.”

“I expect as a country we’ll get to 50% vaccination rate of the population. But we’re going to have a harder time getting from 50% to 70%. And it’s about overcoming the skepticism, it is about education,” he said.

When asked if he thought the politicization of vaccines could keep the US from reaching the needed vaccination levels to suppress the spread of the virus, Hotez said: “It will. Unless there’s a shift or change, it will.”

That’s why, he added, there need to be active efforts, including from the federal level, to reach those communities and combat anti-science and disinformation campaigns and encourage vaccinations.

It’s the only way to reach the normalcy we’ve all so longed for.