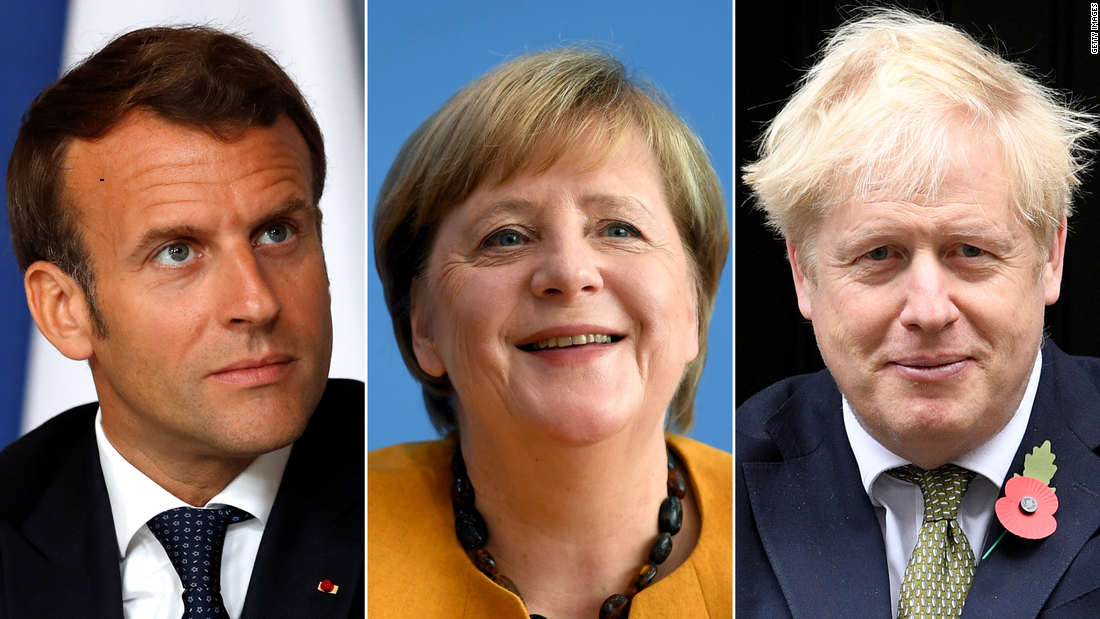 Biden on Tuesday spoke with President Emmanuel Macron of France, Chancellor Angela Merkel of Germany, Taoiseach (Prime Minister) Micheál Martin of Ireland and Prime Minister Boris Johnson of the United Kingdom, according to Biden’s transition team. Prime Minister Justin Trudeau of Canada said Monday that he had called Biden to congratulate him on his win.

Trump has yet to publicly concede and continues to make baseless claims of election rigging and voter fraud. Senate Majority Leader Mitch McConnell and other Republican leaders in Congress are following the President’s lead and have not acknowledged Biden as the winner.

Biden said on Tuesday that he thinks Trump’s refusal to concede is an “embarrassment” and hurts the President’s legacy.

“I know from my discussions with foreign leaders thus far that they are hopeful that the United States democratic institutions are viewed once again as being strong and enduring,” Biden said. “But I think at the end of the day, it’s all going to come to fruition on January 20, and between now and then, my hope and expectation is that the American people do know and do understand that there has been a transition.”

The President’s refusal to accept his loss has stalled the required steps to transition government to Biden. Without a formal transition underway, foreign leaders have called former diplomats from the Obama administration to get the contact information for Biden’s team in order to call and congratulate him instead of using State Department channels, according to diplomatic officials familiar with how foreign governments approach a new administration.

Trump’s top diplomat, Secretary of State Mike Pompeo, on Tuesday refused to accept the Biden victory and said there would be “a smooth transition to a second Trump administration.” Pompeo is set to travel later this week and next week to the Middle East and meet with several leaders who have already congratulated Biden and recognized him as the President-elect.

In a stark departure from Trump’s foreign policy and isolationist worldview, Biden’s calls with the foreign leaders focused on strengthening ties abroad and tackling global challenges, including the coronavirus pandemic and climate crisis, with the help of allies. All of his calls on Tuesday to foreign leaders mentioned the pandemic, the global climate crisis and global economic recovery, according to readouts provided by the Biden transition team.

The President-elect told Macron that he wanted to reinvigorate bilateral and trans-Atlantic ties, including through NATO and the European Union. They spoke about human rights and building global health security, and Biden expressed his readiness to work to address security and development in Africa, conflicts in Ukraine and Syria, and Iran’s nuclear program.

Macron tweeted a photo of what appears to be himself on the phone with Biden and wrote, “We’ll have a lot to do together to promote shared priorities – climate, global health, international security – and effective multilateral action.”

Biden similarly told Merkel that he looked forward to strengthening ties between the US and Germany, and expressed that he welcomed the opportunity to cooperate on a shared agenda with the EU. They spoke about the global challenges of containing the coronavirus pandemic, spurring a global economic recovery and addressing the climate crisis.

In his call to Martin, Biden reaffirmed his support for the Good Friday Agreement, which brought an end to decades of deadly sectarian violence across Ireland, and the peace process in Northern Ireland.

Martin tweeted that he had a “warm and engaging call” with Biden, praising the President-elect and saying he “brings tremendous knowledge & understanding to his new role, and has a great love for his Irish heritage.” He said they had spoken about the importance of the Paris climate agreement and the World Health Organization, both of which Trump had announced the US was withdrawing from. He invited Biden and soon-to-be first lady Jill Biden to Ireland to “properly mark their success.”

Biden and Johnson spoke for about 25 minutes, and the call was described as friendly by someone with knowledge of it. Biden told Johnson that he especially looks forward to working closely together on global challenges as the United Kingdom prepares to host the 2021 G-7 and the UN Climate Change Conference. They spoke about the pandemic and global health security, pursuing a sustainable economy recovery, combating climate change and strengthening democracy, among other topics. Biden expressed his interest in comparing shared priorities with the UK, NATO and the EU.

Macron tweeted that he and Biden had spoken about working together on a number of issues, including the climate crisis, the pandemic, trade, energy, NATO, racism and China’s detention of Canadians Michael Kovrig, a former diplomat, and consultant Michael Spavor.

The week in 15 headlines

California says Disneyland and other amusement parks can reopen April 1