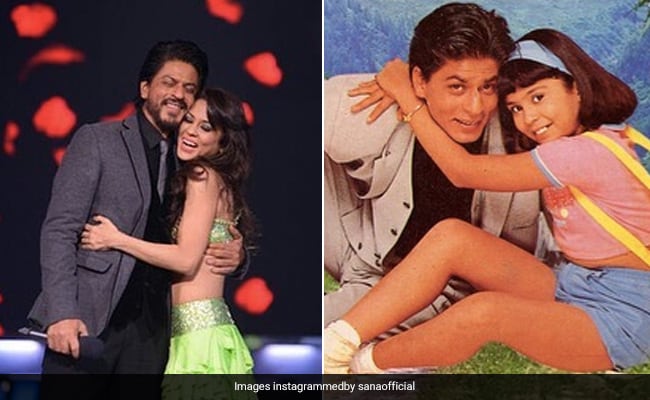 Shah Rukh Khan celebrated his 55th birthday in Dubai along with his family on Monday. Back home, SRK’s closest friends, colleagues and fans posted on the social media, expressing their love and shared some of the cutest messages for him. Sana Saeed, who made her Bollywood debut with the 1998 film Kuch Kuch Hota Hai, shared an extra special wish for SRK, who played her onscreen father in the Karan Johar-directed film. Sana shared two pictures on her Instagram profile. The first one was a relatively recent photograph from the sets of the dance reality show Jhalak Dikla Jaa 6 (in which she was a participant). In the picture, she can be seen hugging SRK. The second picture was a throwback from the film Kuch Kuch Hota Hai, in which she featured as child artiste.

In her caption, Sana Saeed wrote: “Happy Birthday, Shah Rukh Khan. We love you so much.” She added the hashtag #memoriesforlife and accompanied the post with a heart and a sparkles emoji. Take a look at her post here:

#BigInterview! Jugal Hansraj: I would have done a lot more work if the films that I had signed, got made – Times of India

Shah Rukh Khan was such a bright student in school that he could have been a scientist: Rahul Dev – Times of India

Vaani Kapoor: For me, films are the greatest de-stressor even today – Times of India

Entertainment The News Article - May 13, 2021 0
Sonu Nigam recently stepped out to inaugurate an oxygen bank and an isolation centre for COVID-19 patients' families. Spreading positivity, the singer crooned...

Top Stories The News Article - May 13, 2021 0
The Hernando de Soto Bridge on Interstate 40 in Memphis, Tennessee, was shut down Tuesday and will be closed for emergency repairs, according...