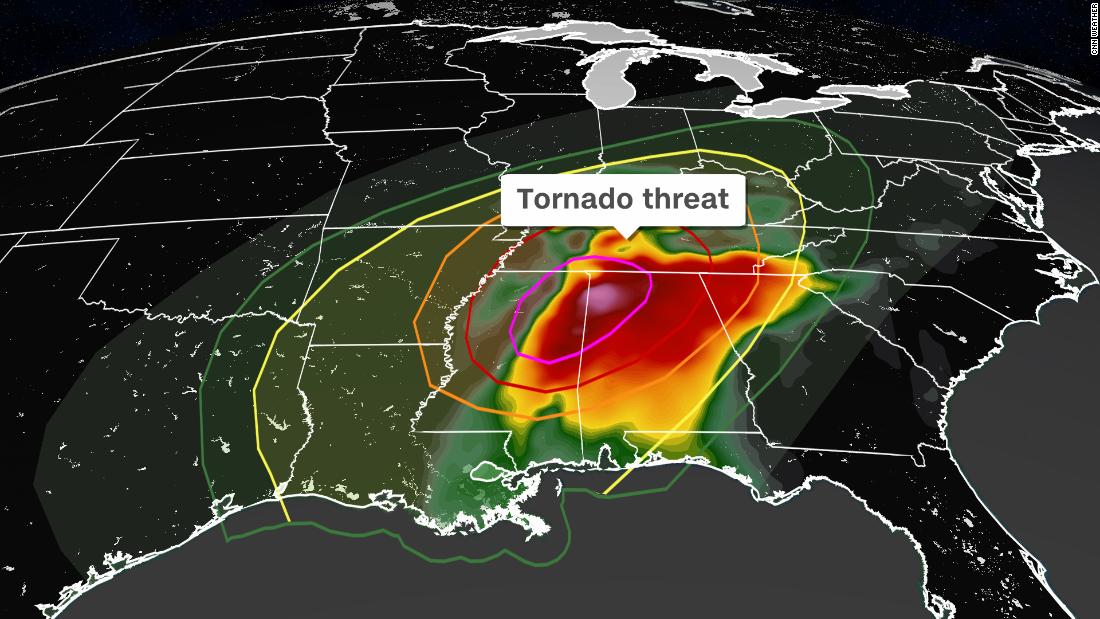 The Storm Prediction Center says there’s a high risk of tornadoes — a level 5 out of 5 — for parts of the South. That’s the worst and highest forecast outlook issued for severe storms. And while it’s very rare for the SPC to issue this kind of outlook — it’s now the second time in a week for the South.

The SPC warned Thursday morning of the threat of a few “long-tracked, violent tornadoes” later in the day and into the evening for the southeast, particularly parts of Mississippi, Alabama and Tennessee.

“Tornadoes, large to very large hail, and damaging winds to hurricane force also are possible over a broad area from the central Gulf Coast to the Ohio Valley and southern Appalachians,” the SPC said.

More than a million people are under the high threat for tornadoes, including in cities like Florence, Mississippi, and Decatur and Madison, Alabama. Alabama Gov. Kay Ivey on Thursday issued a state of emergency for 46 counties ahead of the expected severe weather.”

More than 7 million people are in areas with moderate threat for tornadoes — a level 4 out of 5 — and those include Memphis and Nashville in Tennessee, Birmingham and Huntsville in Alabama and Jackson, Mississippi.

“The ingredients will combine on Thursday for another severe weather outbreak in the South,” said CNN meteorologist Chad Myers. “Very humid Gulf of Mexico air combined with strong rising motion will create multiple rounds of severe weather including rotating storms that could produce tornadoes.”

Ingredients were there last week and tornadoes developed, but not as strong as forecasters thought possible. None of the 49 tornadoes were stronger than an EF-2 on a scale of 0 to 5.

Although the right atmospheric ingredients were present, they didn’t mix in precisely enough to produce the violent tornadoes that were forecast last Thursday.

“It’s like if you put too many carrots in chicken soup, you end up getting a sweet carrot soup and not chicken soup,” Myers said.

As today’s ingredients come together, “a violent long-track tornado will be possible,” the SPC said.

Threat is highest this afternoon and evening

Severe storms will center Thursday across the Deep South as the severe storm risk area likely expands and becomes more significant. Strong storms will be possible from the Gulf Coast through as far north as Ohio.

“Significant severe weather will affect the region today with hail, damaging winds and tornadoes all anticipated,” the NWS office in Jackson, Mississippi, said.

A couple of stronger storms could be possible in this risk area Thursday morning, but the most active weather will begin in the afternoon when several supercell thunderstorms could form.

The forecast shows that the atmospheric conditions will be ripe and “will support supercells with low-level mesocyclones capable of producing strong tornadoes and large hail,” the SPC said.

And it’s not just tornadoes: more than 6 million people were under a flash flood watch early Thursday spanning parts of Tennessee, Alabama, Georgia and North Carolina. Rainfall of up to four inches is expected in the region, with some areas seeing higher amounts.

Into the overnight hours of Thursday, the storms are expected to evolve into a line as it tracks into parts of Alabama and Georgia. By Friday, most of the South should dry out except for parts of Georgia and the Carolinas, where weakening showers and isolated thunderstorms could linger.

School systems are changing plans due to weather

School districts across the region are changing plans, dismissing students early, going to online learning and canceling classed ahead of Thursday’s severe weather.

In Alabama, Anniston City Schools told parents through social media that students would have an E-day on Thursday. Gadsden City Schools announced they would be closed because of the storms.

Meanwhile, the Calhoun County School District in Mississippi said on Twitter that “due to the likelihood of severe weather to include tornado activity, straight line winds, & hail” all campuses will be closed Thursday and students and staff will tune in virtually.
The Pontotoc County School District also announced that Thursday will be a virtual day.

“If for any reason students are without power or internet, they will be able to make up the work,” officials with the school district posted on social media. “The domes at each campus will also be open tomorrow if anyone needs shelter.”

CNN’s Robert Shackelford and Dave Alsup contributed to this report.

Say it isn’t snow! Winter-like weather is forecast into next week